What are you looking for?

Before opening a new ticket, please verify SureDone status at https://status.suredone.com and also review our helpful articles below.

SureDone has functionality with Amazon FBA.  Toggling this is simple.  It can be done individually in our editor

You will find the toggle switch at the bottom of the page, you can choose how you want to fulfill with Amazon utilizing the drop down menu for North American, Europe, China and Japan.

Utilizing this toggle switch is easy if you have single items that you would like to allow to be fulfilled by Amazon, but what if you have more than a few?  SureDone’s bulk editor can easily  upload all your changes with one click!

If you have a CSV file with SureDone headers already, you can utilize that, if not, you may have to export your current inventory under the Bulk section. Once you have your CSV, open it and do a field search with CTRL+F to find the Amazon FBA column header.


1. This is your Amazon FBA Column  Header, the fields below will turn Amazon FBA on or off depending on what is input in the cells.  For row 2 we see that GUID OO-R9O-H is set to DEFAULT.

2. Amazon FBA setting to DEFAULT (Default means FBA is “ON” and the FBA fulfillment center will correspond to your default country [ i.e. AMAZON_NA, AMAZON_EU, etc.])

4. {“status”:”off”,”fulfillment_center”:””} is the long version of the command to turn FBA OFF on the Item Level, however, it is not necessary to type this long form out to turn Amazon FBA OFF

5. OFF is the Simple command to shut your Amazon FBA OFF.

If we don’t have stock with Amazon, we can’t fulfill by them, so we’ll go ahead and turn this off by overwriting the current status with OFF. 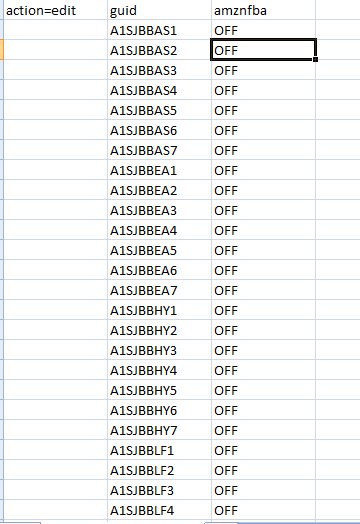 A good practice with the SureDone bulk editor is to only include the minimum amount of information.  In this case we are turning Amazon FBA off for these GUIDs, so we will pare down our CSV to 3 simple columns.

Our Action Column (which is always the first column, this tells the editor what we are doing with our information), which will be EDIT. 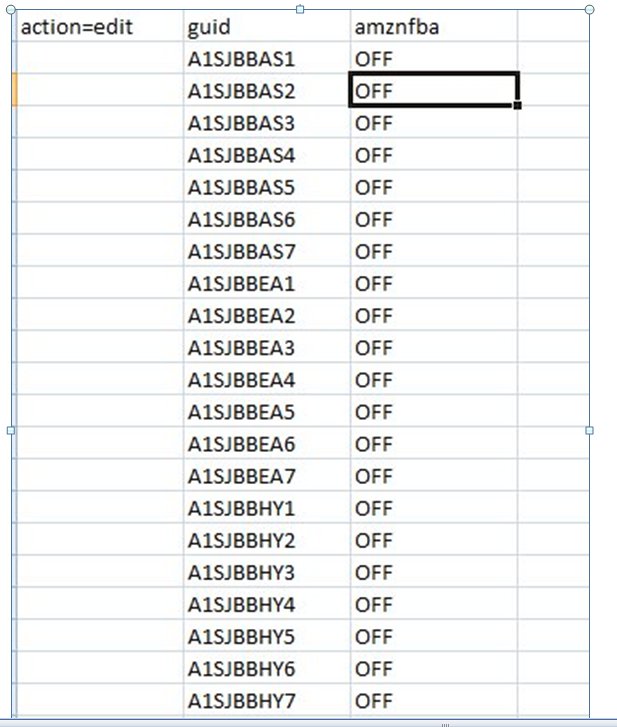 There is also a way to sync your FBA inventory in Settings>Selling.Amazon Options> Sync FBA Inventory 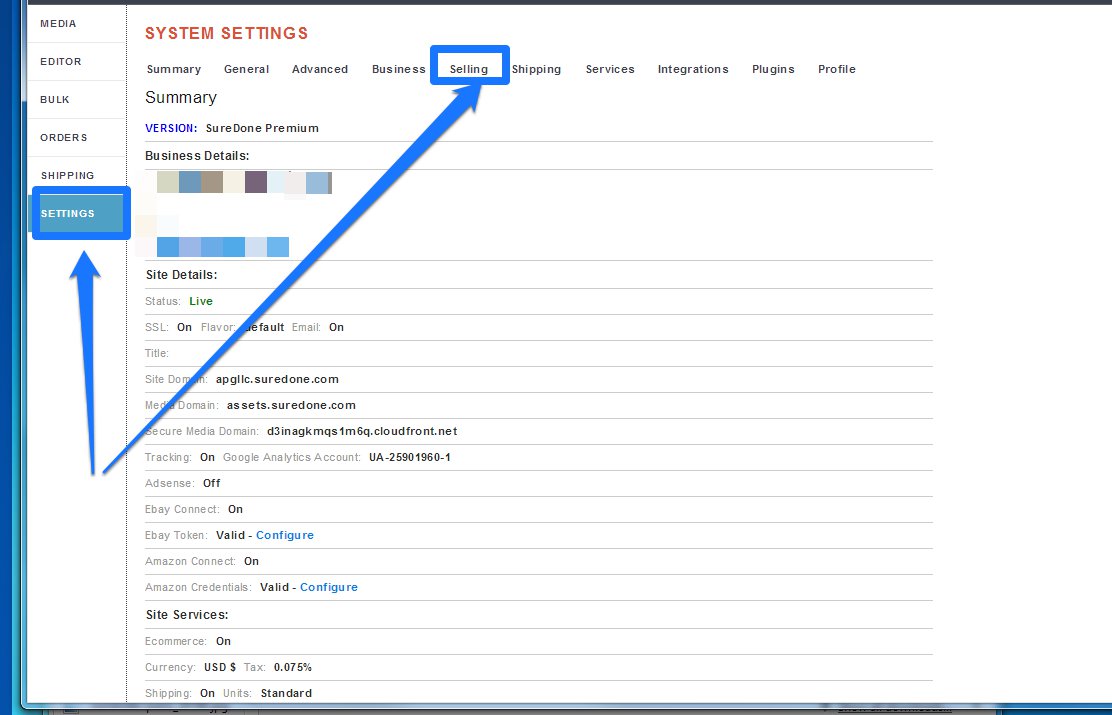 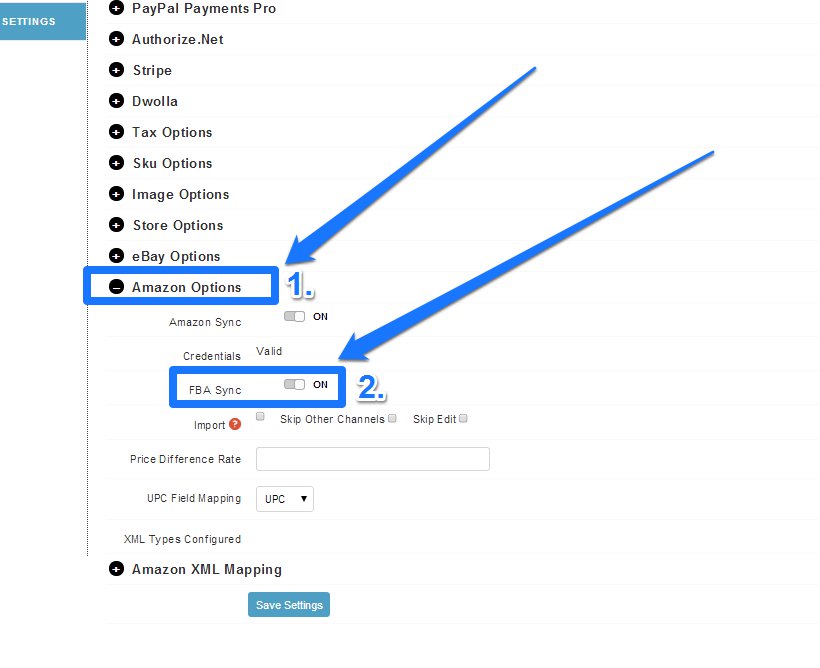 We have now successfully made Amazon FBA sync with SureDone. FBA Sync active will now pull your Amazon FBA inventory numbers every 30 minutes directly and display it under User Fields.


Lets take a look at how this affects SureDone’s appearance.

Go to the Editor and click Edit on a product.

Under User Fields we can see the FBA stock at the moment.

Some things to consider with Amazon FBA:

1. FBA stock is a completely separate and distinct number as far as Amazon is concerned as it is a total of all items Amazon has physically in their fulfillment center(s). Because of this, SureDone keeps track of your stock as two numbers Merchant (indicated above as “stock”)  and Amazon FBA stock.  This is important as it will affect how you list and when your listings end. Let’s take a look at some examples:FBA is on for an item, you have a stock of 1 in FBA and a stock of 5 for merchant stock. A customer orders one of a product.  In this case since the Amazon item is set to FBA,

a. Amazon only considers stock it currently has in its FBA warehouses (in this example, 1) once the order is fulfilled by Amazon, they will automatically end the listing as Amazon considers you out of stock.  You would need to either send more stock to Amazon FBA or switch the item level control of FBA to “off” and be responsible for fulfillment yourself by conventional means.

b. All stock is with Amazon FBA, and you have listed in SureDone.  Because Amazon considers FBA stock as a separate and distinct value, it needs to know whether it is utilizing the stock it has in house (with FBA) or a different number.  In this example, Amazon will not allow listing until you  turn FBA to “ON” by selecting either your Default or indicating the specific country you wish to fulfill through (provided you have stock in that Amazon FBA fulfillment location).

Not sold yet? Sign up for a free account with a free trial of our full software suite.
TRY FOR FREE

If you do not meet the following guidelines you may be charged $75/hour to resolve your issue. Only open a P1 ticket for EMERGENCY Issues with LISTING/ORDERS (NOT ADDING/EDITING) for over 25% of items having a material effect on your business income or if you have received a warning of suspension/have been suspended from channel.

Do you still want to set this as a P1 issue?